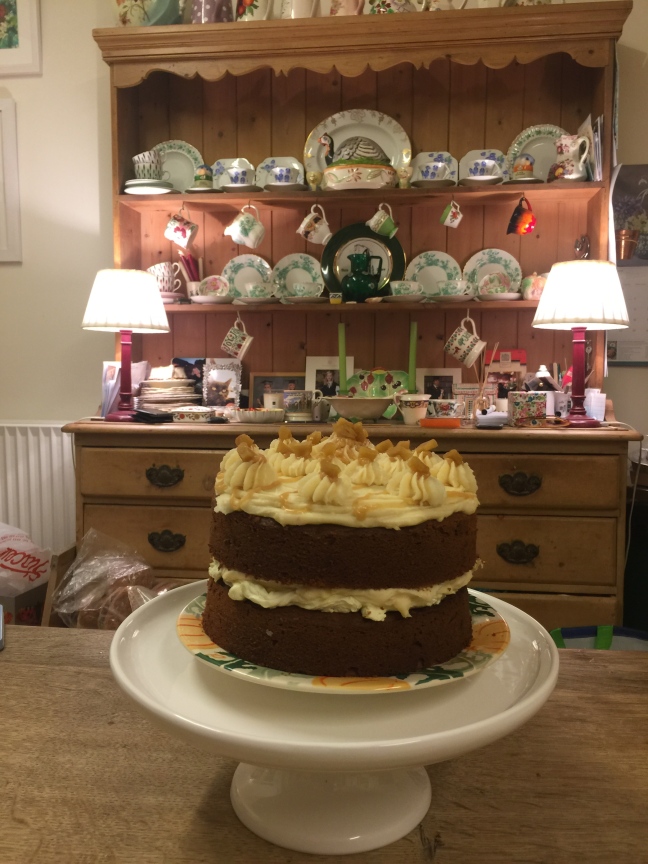 Fantastic support from my girlfriend in response to the news of getting shortlisted for GBBO ’17. She did however have a point, to date the blogs have been mainly savoury or bread based. Well, luckily I recently made some candied ginger, so the choice was obvious, a bit of gingering up

Normally spiced ginger cake is made with lots of black treacle, dark sugar and this results in a gorgeous but very dense cake. The only problem is following Christmas I’ve put on a few pounds so officially I’m on a ‘light diet’. Ok, well cake isn’t exactly dieting, especially with a salted caramel frosting, but I won’t tell if you don’t……………… 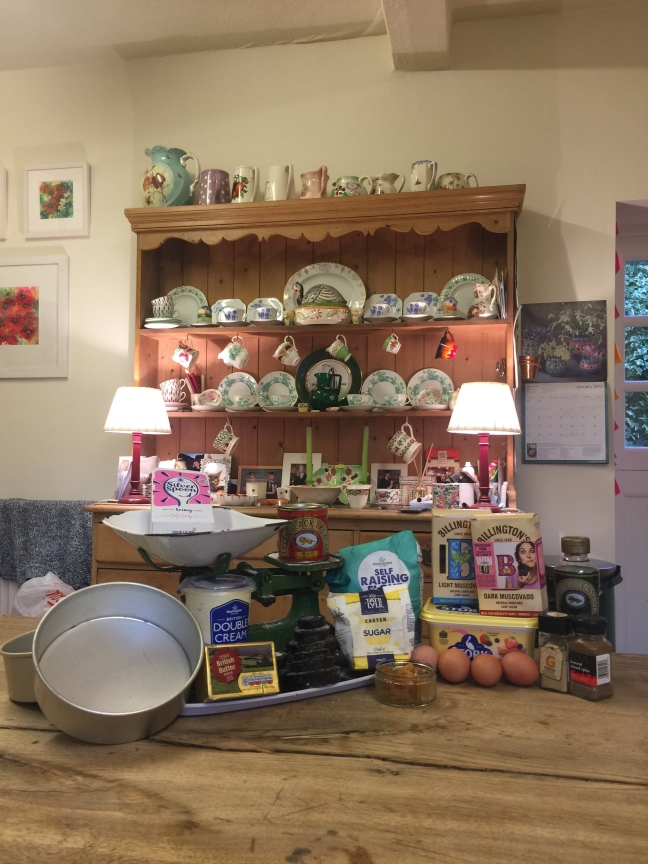 You can make cakes in multiple methods, via creaming the butter and sugar, adding the eggs and then folding in the flour etc. This takes time and according to Mary Berry provides no better results than the all-in-one method.

Start by weighing out the flour and adding it to the bowl of the mixer, then to this add the sugars. 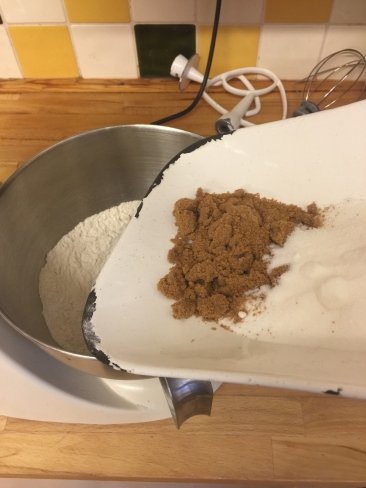 Now measure the spices and add to the mix. The candied ginger is homemade by slowly simmering raw ginger in sugar syrup for an hour then cutting it into small chunks. Add these and the stork to the sugar and flour. 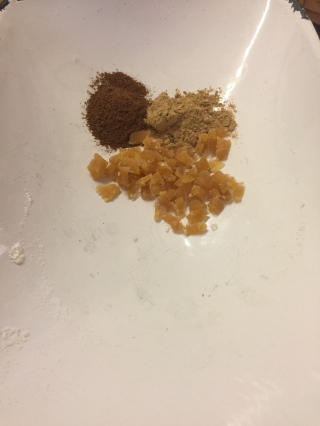 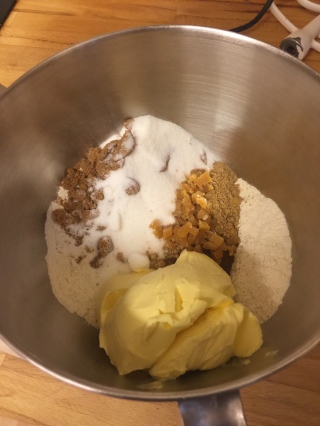 Now add the syrup, treacle and eggs. And that’s all the ingredients finally together.

Combine at high speed with a ballon whisk until light and fluffy. Now transfer to the greased 8″ tins – split evenly and cook at 180C for 25mins till a sqewer inserted comes out clean. 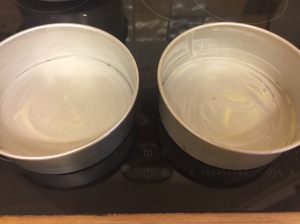 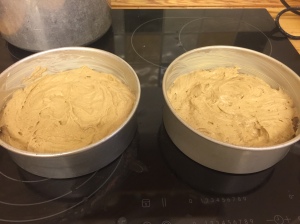 After weighing all the ingredients, start by heating the sugar and water till it has reduced down to produce a thick syrup with a light brown colour. Don’t stir during this period, it will act as a point of crystallisation and mean you have to start again. 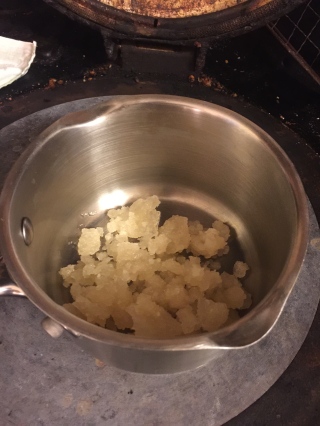 Once the syrup is ready, add in the butter and cream. This bit is the part you don’t want to be stood with your face over the pan…….. it causes a lot of steam and can spit and burn you. 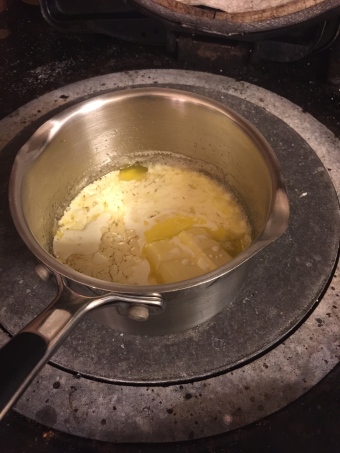 After this, it’s simply a case of cooking the caramel down until a temperature of 118C is reached. At this point, it’s ready; you can now add in the salt. 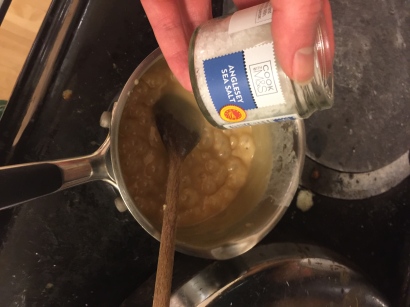 So the cake is nearly finished but like Zena said, I have to up my game. The frosting, made using the caramel, adds another level of flavour to the cake.

Combine the butter, cream cheese and whipped cream to the mixer and combine with the icing sugar using a ballon whisk.

To the mix add a healthy spoonful of the caramel and whisk till smooth.

Ok, its time to build the cake.

Start by removing the cakes from the tins and putting the base on a pretty serving plate. Top this with a healthy layer of whipped double cream and add the second cake.

To the top cake add a layer of the caramel frosting and get ready to flex your creative muscles.

Load up a fine piping bag or syringe with the remaining caramel and delicately ice fine lines of soft caramel across the top of the cake to create a base. 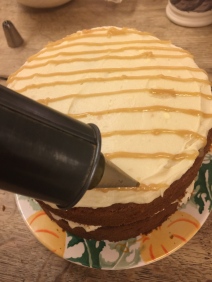 Now fill a large star nozzle piping bag with the remaining frosting and pipe rosettes around the edge of the cake and then a middle ring with a final flourish of a large centre rosette.

For the final touch add a droplet of caramel to the top of each rosette and a small delicious chunk of candied ginger too.

Well thats it, a light but tasty spiced ginger cake with homemade caramel frosting. All that remains is to put the cake at the centre of attention and show it off. Then grab a cup of tea and put your feet up.

I’m about to start nights, but next week I’ll practice for the miniatures challenge………. Dobos Torte anyone 😉

4 thoughts on “Caramel and Ginger Cake”