I just bought a microbrewery to celebrate Bake Off – but more on that later.

According to my friend who works as a BBC weather presenter – it is summer, and that can only mean 1 thing – BBQs. I have many happy childhood memories of these.  One of my favourites was the annual trip to a small country pub called the Beeheive for the August bank holiday. The pub would put on a big BBQ, we would take dads Alfa Spider, there would be Maypole dancing and Morris men. Infact it might have been at one of these I had my first pint, held in one chubby teenage hand whilst the other was grasping a burger.

Well, with the offer of a perfusion PhD in America on my desk once again, I thought I would relive the memory…………but in slightly more fancy style – venison burgers, ciabatta rolls and wild garlic mayo!!!!!

Ok, so I realise that ciabatta is a bit of a controversial bread choice for a burger, but I have reasons. I regularly take my F1s out for dinner and at one meal Harry started eating his burger with a knife and fork. He claims the bun wasn’t strong enough, I claim  he needs to man up. Anyway, ciabatta is strong so no need for a fork.

Start by weighing out the flour, salt, yeast and combining in the kitchenaid. To this add the oil and water. 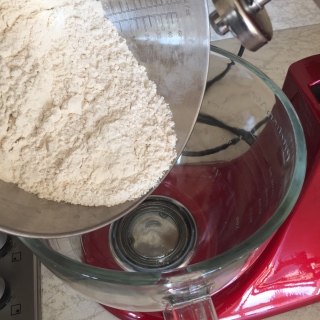 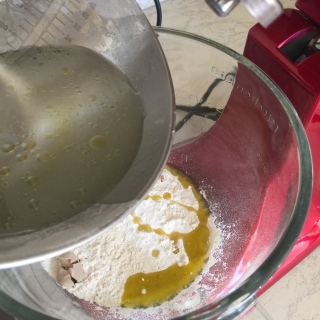 The dough is relatively wet, so it is much easier to make in a mixer with a dough hook. If you want to make it by hand, just remember to oil them and be patient.

Mix on a relatively high speed for 10mins until a highly stretchable dough has been made.

As the dough is so wet it needs a frame to prove in. Otherwise it would just be a bit of a mess. The poaching rings from my pulled pork blog once again have been pressed into service. Place on a well floured baking tray.

Cover with oiled cling film and leave to prove for around an hour or until it has doubled in size. When well risen, and you have managed to sink a few Gin and Tonics, it’s time to bake. Make a cross cut onto the top and  transfer into a preheated oven at 200C.

Bake until golden brown – this varies due to size, but around 20mins.

Nothing goes with Venison quite like gin, well juniper to be precise. Sadly, I can’t lay claim to having discovered this having stolen the idea from Hide burger a few years ago.

Start a few hours before you are planning on eating by soaking the juniper berrys in Gin. This allows you to impart the subtle flavours of Gin into your burger. Lets face it, who doesn’t like Gin. 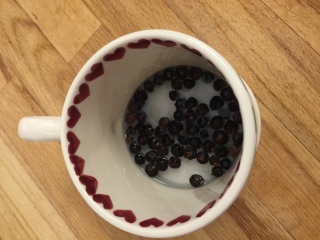 Finely dice the onion, herbs, Juniper and combine with the Venison mince. Season with a twist of salt and pepper. Now to the fun bit of forming.

Divide the burger mix into 4 and mould to shape. A burger press can be really helpful to get the shape just right. Leave in the fridge for 30mins to firm up. 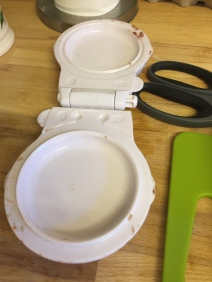 Now, there are lots of different ways to cook a burger; steam, oven, pan but BBQ has to be king. Given this blog is in honour of the Beehieve, only a BBQ will do. Cook for around 5mins on each side, brushing with oil to stop sticking. 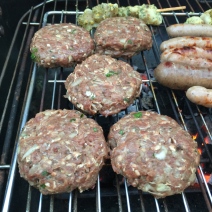 Right, time to relive the glory days – Burger anyone?

Lightly toast the ciabatta bun then assemble the burger with a generous helping of wild garlic mayo, Bloody Mary Ketchup and a handful of salad. Finish with a side of homemade slaw and a beer.

P.s I’ll mini blog the Mayo and Ketchup for you all soon x

“There is an island to which no airline flies. Its boarders are not open to you and I, for they are guarded by youth”

I love Millionaires shortbread, it is a memory of childhood captured in cake form. The first place I ever had it was at a little tea room called Mintons, now long gone. Every week the owner Roger would make a batch and keep a piece back for me.

Well, given that I still need to cram in a bit more practice before bake off, I thought I would make a batch of my own. Relive my youth, its boarders are still open to me after all……..

I will apologies now; to make the caramel you have to stir constantly and it will give you arm ache for a few days,

Chocolate – lots of it

Ignore the eggs, milk and yeast – I  was making brioche as well, more on that later….

Making the shortbread is very easy. Combine the ingredient in a mixing bowl and work together into a breadcrumb stage. As it has such a large butter content this will start clumping together. When it starts to combine into a large ball, spread evenly in a lined and greased tin. Relieve some inner tension and poke it a few times with  a fork to create the familiar pattern we all know and love. 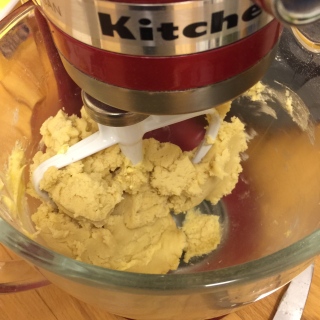 Now bake this at about 180 ( middle of an Aga) until golden brown; you may need to turn half way through. When done, set aside to cool…………. The fun is about to begin.

Normally I would encourage you to multitask, but concentration with caramel is key. Its simple to make, but even simpler to mess up. Start by combining the ingredients in a large pan and melting the butter and sugar.

When everything is melted it’s time to turn up the heat. On a medium heat keep stirring, and for gods sake do not stop. Even if the cute brunette from before is calling you up to arrange a secret weekend, just ignore it…….. The moment you leave the caramel, disaster will strike – it catches on the bottom of the pan and burns. You will not look away now, will you?!!

When the caramel feels thick and is stiff to turn (about 10 mins after your arm has dropped off) test it – get a friend or wandering old person (dad) to dip a spoon of it  into some cold water. When cool, if it is just solid enough to hold its shape when you push it off the spoon, its done. The friend can now try the caramel for taste as well. 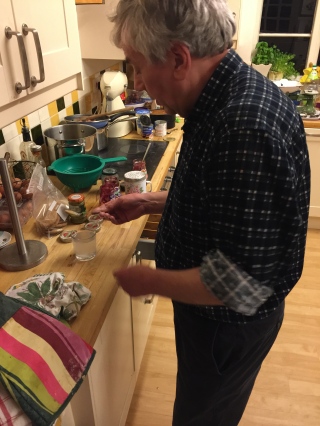 f at this stage you want to get really fancy, you can add salt, coffee or even lavender to make the caramel even more special. After this, simply pour onto the shortbread and leave to cool. 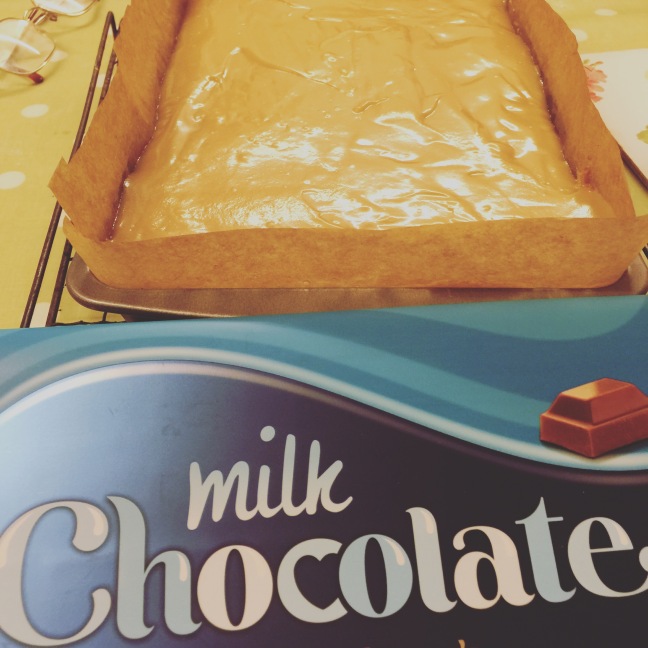 When it’s all cool, top temper some milk chocolate and pour on top. I learnt to temper chocolate a couple of years ago to impress a fellow F1…….. Completely useless skill at the time, but now with bake off looming – cheers H.

Time for a treat

So, there you have it – Millionaires shortbread.  All that remains to do is grab a coffee and eat. The great news is that this batch is for sale in the tea room this weekend.

p.s thats the correct ratio of shortbread to caramel. Don’t forget to pop in this weekend and have a piece for yourself x